We wanted this farm so bad.
It was the perfect place. Close to Martin's work, close to mine. Great neighbours. Of course the place needed major renovations but we bought it for 100K so that was easy to rebuild.
There was 4 acres, great place to farm.
When we bought or some days before we signed, we phoned the town hall to gather info:

"Can we have animals?"
"Of course, you are in an agricultural zoning, you do what you want on that matter"

This weekend I've been offered a Jersey.

As a good citizen, we called the town hall asking them about the legal dimension for our potential new barn.

"why do you want a barn?" they asked
"to put our Jersey in" we said
"but you have no right to have animals" they said.

We've been to the town hall 4 times since. There is nothing we can do.
In Quebec, there are the town hall laws, and then the MRC laws (MRC stands for Regional county municipality) in the town hall books we are legal, but not in the MRC's ones and of course, the MRC is stronger than the town hall. The MRC says that no one can have new animal raising units in the U zone. The U zone ends on the right side of my property.

So now we are in a dead end.

Our house in town isn't sold yet.
We have a house on the countryside that needs major renovation and can't be sell that way.
But we have to move and have a place for the chickens, rabbits, cats and quails we have asap.

But there is no way the bank will authorize a mortgage with those things in our pockets.

Of course, the girl at the town hall always said she never said that.

I also bought that house though an attorney, never did she mentionned that.

"she must haven't known that law" said the girl at the town hall.


Posted by The Cat Lady/Domaine Coquelicots at 11:34 AM 5 comments:

We have been refused all ...

Even chickens.
Our dream just gone to dust.

I don't know how I will survive that news.
Posted by The Cat Lady/Domaine Coquelicots at 2:49 PM 1 comment:

I feel like we are running on a field of track and field.
Running for our life, trying to make ourselves a life here but with tons of obstacles on the way.

This is what I was trying to explain to my cousin Gabriel this weekend.

Having a project like ours is very very hard where we live.

Turns out that this weekend we have been offered a Jersey calf by my uncle.
I was delighted. Cautious, Martin phoned the village administration to make sure everything was in order and to talk about another project.

We are in a place where it's zoned "business and farm" Farm on one side, business on the other. To our surprise even if our place is zoned farm, we can't have a cow or a pig, as it is "too close" to the other houses ... or we can but the girl from the town hall talked about calculation and stuff ...

I mean geez why keeping it that way if it's impossible to do? We need that zoning if we want to go on with our project.

So many rules, so many burdens, so many restrictions.
Posted by The Cat Lady/Domaine Coquelicots at 1:40 PM 3 comments:

I am not dead!

Posted by The Cat Lady/Domaine Coquelicots at 11:47 PM 2 comments:

This is sooooo not fun.

My system is to the deepest low at the moment.

I just hope I'll come back to a "normal"
Posted by The Cat Lady/Domaine Coquelicots at 12:35 PM 4 comments:

Chuck vs The Chicken 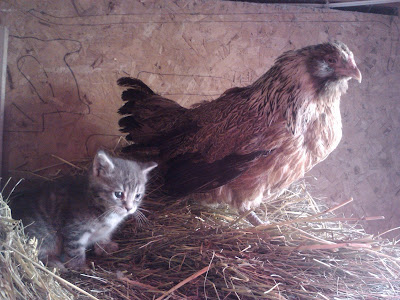 Meet Chuck. No kitten got a name before the age of 1 month normally here. It's the tradition. I wait 'til I know them, 'til I see them in action and 'til they have an history. (exception from Dijon who got a name from the fact he is yellow and was born shortly after Moutarde's passing).

Since our lil buddy is now a month, he has been named : Chuck. Why Chuck? 'Cause he is the sole surviving member of his litter and he also survived his two uncles; Baptiste and Paul ... hence, the cat is Chuck Norris!

This morning, Chuck made an improbable meeting with a fleeing Silver Ameraucana hen ... that was funny :)

A very big bird he must have thought. Though, no harm to any of them.
Posted by The Cat Lady/Domaine Coquelicots at 8:56 AM 1 comment: 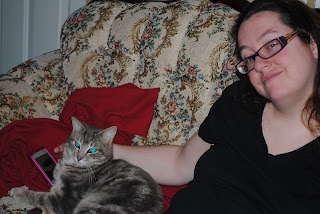 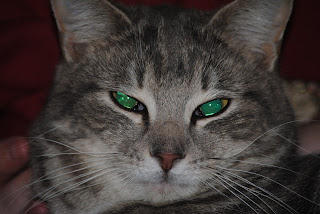 We buried Paul (and small baby Dijon - his nephew) in the backyard yesterday.
Mat and Bruno, my two best friends, came to help us as the soil was still a bit frozen.
It was super hard to go through.
I found him a nice spot though, near the biggest tree we have near the barn. Close to the place where one day before we died we went together to play.

Last night, as Martin was going to the barn, he saw Mirchat and Mirshook playing in the tree ... never did they went there.

They were playing with Paul, I am sure.
Posted by The Cat Lady/Domaine Coquelicots at 7:33 AM 4 comments:

And then, people wonders why I am emotionally unbalanced.

They say it's because I have plenty ... that the odds are higher. False. I know tons of people who have cats, barn and indoor one, never ever do I hear about such bad luck.

Paul is dead. Can you believe that? My Paul is dead. The cat that I fell in love with. The cat I was having like the deepest, nicest connection with died yesterday hit by a car, that didn't even stop just in front of my house. What was he doing there? No idea. I mean he normally goes to play in the barn in the morning with his brother and the other barn cat. Never did I see him coming near the road. I check my cats normally when they are outside. I am sat in front of the only window of the house where I can see what's going on in that area.
When they go near the road I normally go outside and tell them not to go there.
And normally they come back. I never saw Paul going there.

'Cause if that was for the cats "only". I say only but geez we all know that losing so much in a so short period of time is like taking your heart out, dragging into the mud, putting it in a shredders, batter it in rocks and try trying to putting back into place.

But no, it's not just the cats. I have the cats and then I have the other "normal twists" of life.

Just a list, no details, but a frightening one. From 2000 to now I had to go through the following events:

-Death of 16 cats (starting in 2006, ... count it .. it's like around 2-3 cats per year!)
- Cancer of my mom
- Diseases on both my parents
- My own disease
- 4 miscarriages
- 3 failed adoption proposals (among them one after we were preparing the room (like they were telling us it was 100% sure))
- 1 death of a friend
- 1 sue (for a thing I wasn't even responsible of - I've been absolved but still ... )
- 1 death of my best friend
- 1 Depression
- 1 major misdiagnosed who brought me ton of problem and made me lose my insurance
- 1 closing of a business
- Multiple rejections from friends due to various circumstances (among them ... the fact that I was having a strange life)
- Fraud
- Rejection from my entire in law family
- Major feud with my in-laws

And I am not talking about all the little things that bug us.

I used to have a co-worker who would say "A quiet day in your life is like an awake nightmare in mine".

She was so right.

I feel like I am in constant fight. I dream of a day I would wake up and feel secure. 'cause I am not feeling
safe anymore. I mean some people would say "I ask for it" but geez, all these things have brought me to a state where I just can't handle more.


Posted by The Cat Lady/Domaine Coquelicots at 9:22 AM 4 comments:

The Cat Lady/Domaine Coquelicots
I love cat, I can't help it, it's like that. I don't have kids, I have cats. When I moved to the countryside, I got plenty. Here are piece of life with my cats. As for my countryside life: I've been always in love with working on farm and gardening and stuff. We (my husband and I) are wannabe homesteaders.

If you read me, you probably read them ...